Grow Hemp for the War! 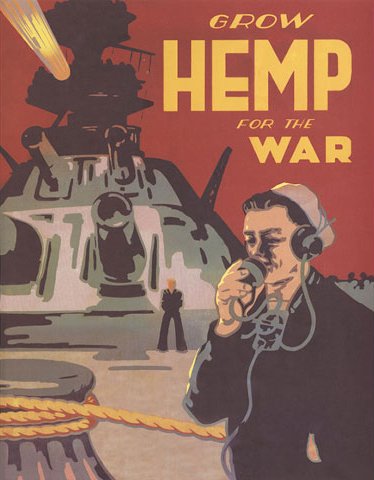 Some Hemp history for you. One factor affecting the demand for hemp was a lack of markets. Cordage, twine, and bagging were the primary items for which hemp was used. As late as 1916, hemp hurds were considered a waste product and hemp seed was only used as birdseed, not as food. Jason L. Merrill wrote in a USDA circular that “Our forests are being cut three times as fast as they grow.” Dewey (his co-researcher) and Merrill knew that using hemp for paper could prevent deforestation and help save the environment. Despite the knowledge that hemp produced a more efficient superior grade of paper, wood pulp continued as the primary source of paper.

The hemp industry operated under the well-known principles of a capitalist society where supply and demand determined price. People decided to grow or process hemp based on the amount of money that they could receive for it. This poster was widely distributed in agricultural areas of the U.S. during WWII.